You are here: Home / Marketing / How to Make a Standout Company Facebook Page

These days, almost every company is jumping on the social networking bandwagon. This isn’t necessarily a bad thing, as having a following on a social network like Twitter or Facebook can help you to garner new customers and create a sense of loyalty among your existing customer base. If you don’t approach your company Facebook the right way, however, the page could be viewed by your followers as boring or pointless. So what do Facebook users like, and why do they like it? Below you will find some of the characteristics users like to see on company Facebook pages: 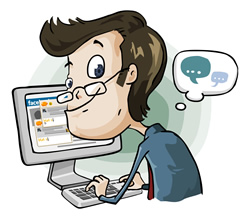 As with any other type of marketing, Facebook marketing works well when calls to action are included. Asking readers a direct question, in fact, can increase feedback by around 64 percent. When choosing questions, try to make them at least somewhat relevant to your company’s goals. If you sell natural foods, for example, try asking your Facebook followers about their favorite organic foods. This keeps their focus on your company’s goals far better than a call to action chosen only to boost feedback rates.

Too often, companies create a Facebook page only to routinely neglect it. In fact, less than 8 percent of Facebook users subscribed to business pages see updates from that page daily. This could cause you to lose a large number of your followers because they have little incentive to stick around, meaning that when you do post an update, fewer people will be viewing it. Update on a regular basis by posting something (a status update, link, or picture) at least once a week, preferably more.

Another great way to engage your social network audience is to provide commentary on current events. Almost everyone follows the news at least semi-regularly, so it’s a great way to make your customers feel included by giving them something they can relate to. If it’s a controversial story, provide comment or analysis only when it falls within your company values and is unlikely to alienate customers. For example, if you’re a Christian company whose religious beliefs are a core part of your business, it would make sense for you to comment on a story about abortion. If you’re a religion-neutral company, however, such commentary would likely not be appropriate on your Facebook page. Customers will absolutely abandon you if you give them a reason to, so try to avoid offending anyone.

Having a strong photo album is a great way to engage your Facebook audience. Facebook users can (and often do) flip through entire albums of pictures, so make sure you provide them with some high quality viewing material.

Humor can engage your audience effectively due to the simple fact that everyone loves to laugh. Keep your jokes tasteful, of course, but feel free to provide occasional updates that are strictly aimed at providing your followers with a dose of humor. Understand, though, that not everyone finds the same things funny, and if you come across as “trying too hard” (by posting ultra-cheesy jokes or by relying too heavily on humor for your content), you could alienate some of your customers.

Facebook can be an extremely valuable marketing tool for your business, but be sure to utilize it well. Humor and commentary on current events are great ways to keep your customers interested, but be careful not to be too controversial. Frequent updates, strong pictures, and calls to action are also great ways to boost activity on your company Facebook page, but be sure to keep things interesting. If you don’t have anything worthwhile to post, it’s better to simply come back later when you do.